I’ve finally had a moment to release this (much better) version of ARToolkitPlus for Cinder, for both Windows and OS X. 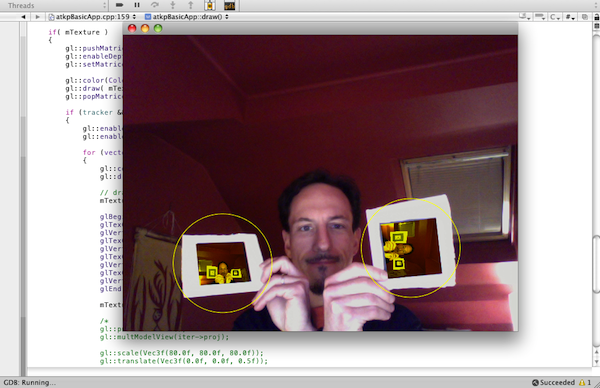 The long of it (otherwise known as the “README” file that comes with it):

The code has a variety of licenses, please refer to the files themselves for their license.  The original code from ARToolkitplus  – http://studierstube.icg.tu-graz.ac.at/handheld_ar/artoolkitplus.php and ARToolkit – http://www.hitl.washington.edu/artoolkit/ – was released under a GPLv2 license, the new additions (few as they are) are released under the GNU Affero 3.0+ license (which is better) and/or an Apache license (where we don’t care about derivative versions).  Sorry for the confusion.
If you find this useful, please let us know! If you find bugs or have other good ideas on how to optimize this code (and there are plenty of ways) then perhaps you’d like to contribute.

This version includes some example code for tracking multiple AR markers (the venerable Hiro and Kanji) and figuring out their position on the (camera) screen and their 4 boundary points (vertices). It also includes two pre-built libraries for both Windows 7 and OS X 10.6.  It will probably work on 10.5 as well, and maybe even Win XP, who knows?  There is an XCode project and a Visual Studio 2010 project included, as well as some files gleaned from the ARToolkit and ARToolkitPlus original projects that may come in handy.

Well, there’s no real “installation” process – simply copy to your “blocks” folder in your Cinder directory, and the example projects should build and run.
There are, unfortunately, a few caveats.

For one, on Windows I decided to load all the configuration files from a “resources” folder that sites next to the executable file.  This is for flexibility, so you could swap different markers and marker config files without re-building the whole project.  Another way to do it is to package everything into the EXE itself and use loadResource() to load the data and parse it – that would require changing the guts of ARToolkitplus and isn’t impossible at all but just a slight pain.  On OS X, everything is copied into the application itself.
One side-effect of this is that if any configuration files or pattern files are missing, your application will simply crash.  D’oh!  Of course, you may want to have it fail in a more elegant fashion, but for what I was doing with this project, if it failed than it might as well crash hard because it was useless.

Your results may vary.

If you decide to poke around, the ARToolkitPlus/src/core/ has most of the code you might find useful, especially the files I changed – arGetCode.cxx and arMultiReadConfigFile.cxx.  With the old ARToolkitPlus, you could only use numberical pattern ids in the marks config file, with this version you can use file names and your own custom (original ARToolkit-style) template ids, such as in the example.

A BIG PROBLEM is that on Windows you very easily get to the maximum path length, and your app just dies.  If it crashs unexpectedly on load, it could be that your code is nestled too deep in a cosy burrow of sub-folders, try building and then copying it to a folder closer to your C: root, or even better, uncomment out my DEBUG 1 compiler define in arGetCode.cxx and your main app and use a hard-coded path while debugging.

WHAT YOU DON’T GET (YET)

Now, you get it all…