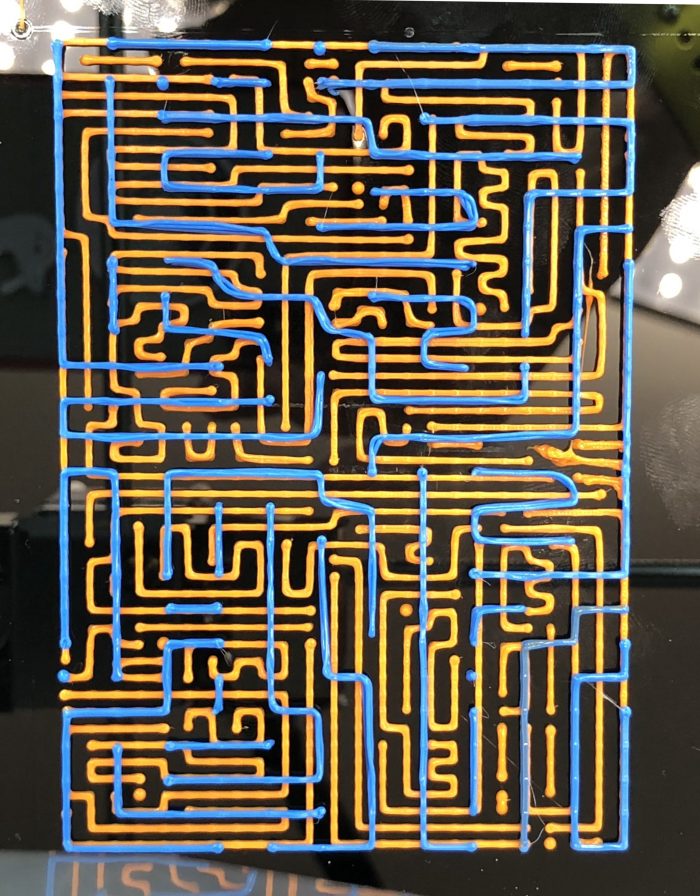 I’ve been developing a new art work, The CyberAnthill. It’s loosely based on a space-filling cellular automaton that was in turn partially based on a cross between Langton’s Ant and the Tron light cycles game. It’s a way of filling up 2D spaces, like grids, with emergent systems that are unpredictable in their internal form but still predictable in that they fill up a specific space (2 3D cube, in this example).

I’ve added a library* and the code for this work to the ever-growing system for “live computational sculpting,” e.g. livecoding 3D printing, that I’ve been developing, called LivePrinter. (You might have seen some of my recent posts on it – I spoke at MIT at the Open Source Hardware Summit in Sept. 2018 and gave a bunch of workshops on it in London in early 2019)

*Is it a “library?” It’s pretty small and simple…

The CyberAnthill is both a generative sculpture and a Live Computational Sculpting (LCS) system that uses a 3D printer and custom software to build plastic sculptures out of layered cellular automata.

As the title alludes to, the cellular automata are inspired by Langston’s Ant and the light cycle racers in the cult 1980’s science-fiction movie Tron. Instead of the normal process of printing exacting, predetermined 3D models, the 3D printer generates its plastic forms by running unpredictable computer code. A number of software agents fight with one another to cover the printer bed with straight plastic lines before dying out. On top of their ‘dead’ trails, a new brood of agents starts their journeys and the cycle repeats until the entire surface becomes a sculptural record of artificial ‘life’.

The CyberAnthill demonstrates how LCS can be used to create generative forms in realtime that make their emergent complexity evident in their layered construction. This physically embodies Wolfram’s theory of ‘Computational Equivalence,’ which posits that the only way to understand the future of complex, emergent systems like the universe itself is to run through each computational stage of their existence, in sequential order, from their beginning conditions. In other words, the only way to simulate a complex system like the universe is on a computer of equivalent computational power as the universe itself. There are no shortcuts to predicting the future.

This work also comments on automated manufacturing and artificial intelligence, where future robots might create materials from layered mixes of different micro-structures. For example, airy grids of 3D printed ‘bubbles’ ranging from large to tiny could be used to create chairs using the same material. This continuous form could alternate between hard but light, both flexible and firm at different places as needed. The humans would set the design requirements, and the computer would manage the complexity of creating the finished product.